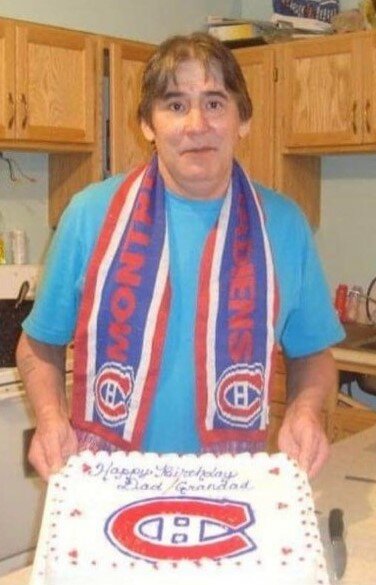 Please share a memory of Carl to include in a keepsake book for family and friends.
View Tribute Book

JULIAN, Carl Francis, age 66 passed away peacefully at home on Monday, September 12, 2022. Carl was born in Truro, NS. He was the son of the late Peter & Mary Agnes (Sack) Julian. Carl was born and raised in Indian Brook. He moved to Truro later in his life until his passing.

Carl played hockey as a youth for the Micmac Bisons. He became a chef/cook and worked at the Keltic for many years, he enjoyed cooking a variety of foods especially chilli.

He was a Habs fan and enjoyed rousing the opposing teams of his brothers and sons. He was a jokester and always had something witty to say to his friends and family. He enjoyed his online games of gambling, bingo, Scrabble, watching hockey games and brook fishing. He had strong political beliefs and was very invested in his treaty rights, community, and family.

Carl is survived by his sons, Clayton, Nimkeek, Cody (Cherie), Robert, Peter & Raymond, his daughter Sammy-Jo, 17 grandchildren, and 3 great-grandchildren; sisters Theresa Levi (Neal), Margaret and Mary Agnes (Aggiejo) Julian, all in Indian Brook; brothers, Ryan and Pete in Indian Brook, his godchildren, John Douglas Jr. and Teressa, and many nieces and nephews. Carl will also be missed by his companion of 18 years Deloris (Dodi) Jordan, Truro, and his fur babies.

Look inside to read what others have shared
Family and friends are coming together online to create a special keepsake. Every memory left on the online obituary will be automatically included in this book.
View Tribute Book
Share Your Memory of
Carl
Upload Your Memory View All Memories
Be the first to upload a memory!
Share A Memory
Plant a Tree