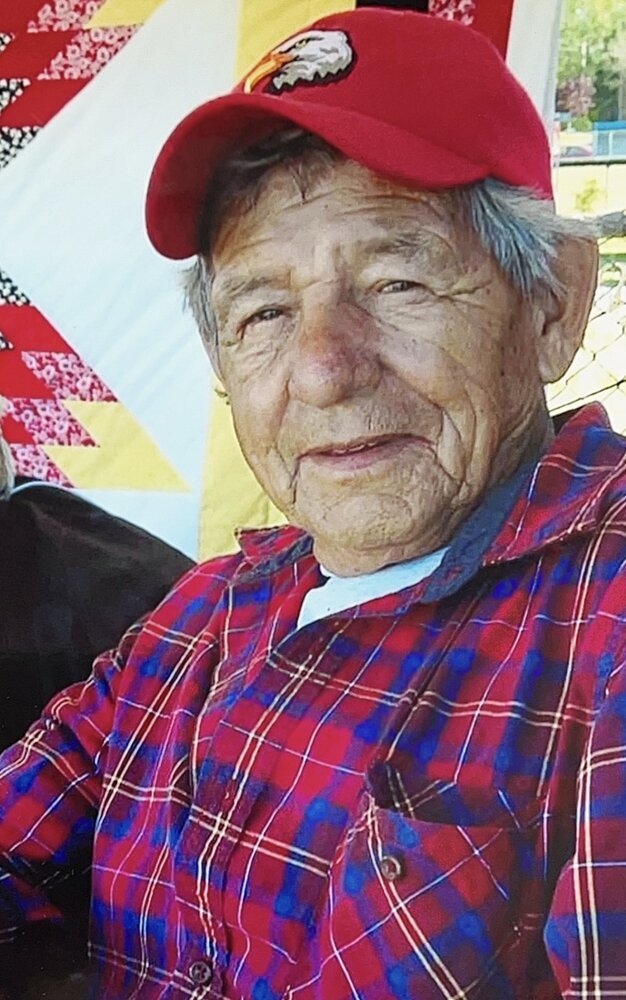 Please share a memory of Stephen to include in a keepsake book for family and friends.
View Tribute Book

JULIAN, Stephen (Ekien) Joseph  (affectionately known as ‘Flash’) – age 83 of Indian Brook. After a brief and courageous battle with renal disease, Ekien was granted his final wish of leaving this physical world to enter the spirit world at home on February 15, 2022.

Our community of Sipekne’katik will feel the loss of Ekien for some time. He was a loved and well-respected elder whose spirit radiated wherever his minivan (s-l-o-w-l-y) took him.  Stephen was a very active participant and helper in all his own community events and throughout Mi’kma’ki Nova Scotia. Ekien’s smile was infectious and his laugh was sure to comfort anyone’s ear that was blessed with his presence.  All who knew Flash (Grandad /Uncle) were touched by his humor, mild temperament, warm demeanor, witty personality with quick one -iner sassy remarks…in particular, to any Toronto Maple Leafs fans in the immediate vicinity.

Born in Bayfield (Paqtnkek), Antigonish on June 22, 1938, he was a son of the late Noel Thomas and Madeline (Gabriel) Julian. At the age of 15, Stephen began what would be a lifelong passion for being an avid woodsman. Most recently, his work designing and cultivating the Mi’kmawey Debert Interpretive Trail is admired by all who walk the track. He took great pride and ultimate care in his work leaving his legendary mark and respectful footprint on many forests throughout Nova Scotia. It’s not often you hear of an 83 year old still working in the woods with a power-saw but our Grandad did and enjoyed every minute of it.  He also worked as a truck driver for the old mill that was once on the reserve.  His entire life was devoted to the environment and all it had to offer. He never took advantage of the resources he had full access to, ever.  Many years ago he and his kids planted several trees in perfect rows down the ‘desert’ now known as “Sagamow Park”

Stephen also went to school to become a meat cutter at an early age. He was a hobby carpenter, he built beautiful homes for people.  He truly was a jack of all trades.  Said no to nothing.  He’d try anything.  He was quite the old school mechanic too.  Just last spring he changed the struts on his van right in his driveway.  It would be a rare event if you heard him complain about anything  other than weak tea.

He was such an easy going guy.  A fine gentleman who loved his life, everyone in it and a good cup of pi’tewey (tea).

Grandad was a traditional knowledge holder who was raised to protect and preserve the environment in the most respectful ways.  Before he cut a tree down he would survey the area to ensure his work allowed for surrounding trees to thrive.  Before taking a fish from the river, he’d make sure it wasn’t a female or undersize.  He would never shoot a doe.  Females are the givers of all life, he’d say.  He’d leave the big bucks to roam about because their dominance was needed throughout the forest. His love and respect for mother earth was evident as he practiced Netukulimk (take what you need for today and leave the rest for tomorrow) He passed down this knowledge and these traditions to all of his children and grandchildren in hopes they will do the same.  Grandad could often be heard saying, “Never fight over or play with your food or you’ll go hungry someday.” He adamantly believed that Creator and Mother Earth would settle the argument for you by removing the resource you’re fighting over and have it move on to where it will be appreciated.

Stephen and Becky (Beck & Ek) not only raised 7 children together, they were a team in various other aspects of their lifetime together too.  Grandad would spot a nice, straight looking ash tree in the woods, diligently harvest it, and prepare wood splints for Becky to make her beautiful baskets and flowers.  They’d sell them or trade them for money or other items to help with the raising of their children.  He was a hard worker and did what he had to do for his family, always.

Stephen loved fiddle music and oldtime country classics.  He would often turn up his music while doing work around the yard.  His yard was his ‘heaven on earth’ and people often referred to it as that because of how beautiful and pristine he kept it.  His most recent addition was his white and red lighthouse windmills that he handmade out of wood this past summer to edge one of his many flower gardens.

Grandad thoroughly enjoyed fishing; be it by himself or with the gang.  He’d fish for hours on end.  Catch and release mostly but if he hooked onto an appropriate size meal he’d take it home to feed his family.  Even during his final days with us, he would talk about how much he liked to fish and that come springtime he’d be down on the riverbank fishing.  We believe he meant it and without a doubt, his spirit will be on the riverbank somewhere casting away.

His life was full of purpose and meaning.  Always willing to lend a helping hand to anyone in need.  He didn’t ask for anything from anyone.  He did things himself, his way and these teachings passed down to his children.  If you want it, earn it.  Don’t ask for it.

Grandad loved his sports, especially ball and hockey. He played both throughout his life, playing hockey until age 72. He supported his beloved Montreal Canadiens win or lose.   His favorite players were his kids and grandchildren.  Rarely missing a game and if he thought you didn’t play to your full potential, he’d let you know by reminding you that you’re good so play good or he’d just leave the arena before the game ended.  He had a huge heart with plenty of helpful advice and some chirping too.

Stephen was a great storyteller, not often you’d hear the same story twice.  He had a story to tell with each cup of tea he sipped.  Lots of tea.  Lots of stories. Always interesting and most times, very funny.

Besides time spent working in the woods to support his family, Grandad’s life was full of adventure that also included being outside canoeing, blueberry raking, potato picking, apple picking, Sunday drives with the love of his life, speaking Mi’Kmaq. His dress attire, without fail, for all of these occasions would be a plaid dress shirt with light T-shirt on backwards underneath, a pair of blue jeans and a red hat.

If you knew him you admired him. His greatest pride was his grandchildren; nothing could bring a smile to Grandad’s face quite like his grandchildren could. That feeling was mutual, they all loved him dearly.

Along with being a proud Traditional Mi’Kmaw man, Stephen was a very religious man who believed deeply in his Catholic faith.

We, the family of Stephen would like to express our most sincere appreciation & gratitude to the various teams of healthcare providers who, without much notice, went above and beyond to make sure Grandad was as comfortable as possible and for making his final wish to be home a reality.  He knew he was at home when he took his last breath.  We will be forever grateful for that.

Donations in Stephen’s memory may be made by e-transfer to Stephen’s wife at MaryRJulian@gmail.com

Tributes, words of comfort and memories can be shared with the family at www.ettingerfuneralhome.com

Look inside to read what others have shared
Family and friends are coming together online to create a special keepsake. Every memory left on the online obituary will be automatically included in this book.
View Tribute Book
Share Your Memory of
Stephen
Upload Your Memory View All Memories
Be the first to upload a memory!
Share A Memory
Plant a Tree