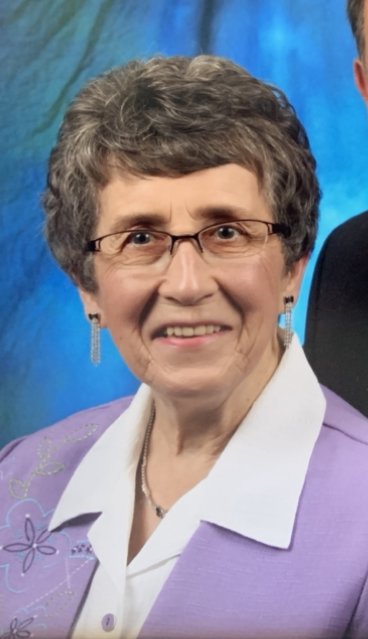 Edna was a lifelong resident of Elmsdale after moving there as a toddler. She was a long-time member of the Riverview United Church, UCW,  T.O.P.S. (New Beginnings) and more recently the Red Hat Society. She was a skilled seamstress and sewed for many people within the community. Edna had a large circle of friends, and greatly valued her friendships with Mrs.“J” (Margaret Johnson) and Lorna Johnson. Family was very important to Edna, she always attended the kid’s and later her grand kid’s school and sporting events. She was well known for her turkey dinners and homemade dressing along with dinner rolls, jelly rolls, beets and mustard pickles. She worked at the Farmer’s Cheese Plant both in Elmsdale and Truro. Edna enjoyed travelling with Gordon to many locations, such as The Netherlands, France, Belgium, Germany, Cuba, Dominican Republic, Mexico, Barbados and much of Canada. Edna was an active member of her community and worked both provincial and federal elections. She volunteered with the Canadian Cancer Society and the Heart and Stroke Foundation. Edna loved animals, and will be missed by her beloved cat, Katie. She and Gordon enjoyed going to dances at the Nine Mile River Hall with “the gang” for many years.

Besides her parents, she was predeceased by son, Alan (1980), grandson, Jamie (1981); siblings, Arthur, Esther, Nelson, Donald and Ralph; brothers in-law, Len and Bill.

Special thanks to Dr. Iain MacNeil and the nurses and staff of Colchester East Hants Health Centre, Truro.

Donations in memory may be made to the Alzheimer’s Society, Red Cross or the Heart and Stroke Foundation.

Tributes, words of comfort and memories of Edna may be shared with the family at www.ettingerfuneralhome.com