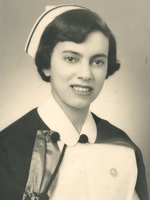 JORDAN, Mary Julia – of Enfield. Our mother, our friend, our light, Mary Julia Jordan (Isiah), 88, “pushing 90”, passed away December 27, 2019 in the QEII Infirmary, Halifax, surrounded by her loving family. Mary grew up in Chatham, NB, one of seven children of Charles and Rose (Napke) Isiah. She was fiercely proud of her Lebanese heritage and continued to share her culture with her own family through cooking traditional foods and story telling. While studying nursing at the Halifax Infirmary, she met British Submariner Michael Jordan, and after a whirlwind six-week courtship, they were married, which lasted 62 years until Mike’s passing in June 2018. Together, Mary and Mike built a life, raised their family, and had strong lasting friendships in Enfield. Mary will be missed by all who knew and loved her, but most deeply by her children and grandchildren. Mary is survived by her children, Ruth, Bedford; David and Bernadette, West Dublin; Tracy, Enfield; Julie and Pedro, Halifax. She is also survived by her grandchildren, Adam and Jody Waterfield, Isaac, Mason, and Rebecca Jordan, Corey and Carson Isenor; her son-in-law, Tom Isenor; and her fur grandbaby, Plum. She is also survived by her only living sibling, David (Debbie) Isiah, Moncton, NB. She was predeceased by her parents and husband; as well by her brothers, Joe, George, and Peter; and sisters, Yvonne and Annie. Mary was the glue that held our family together. It was impossible not to laugh when you were around her; it was impossible not to feel the love she had for life. Whether it was trips to Cape John, bowling with friends, or just sitting on her deck, Mary embraced life and all that came with it. Her optimism and sassiness will long be remembered. She had a deep faith and patience for everything and everyone. Visitation will be held from 6-8pm Thursday, January 2nd in St Bernard’s Church, Enfield. Funeral service will be held 10am Friday, January 3rd also in St. Bernard’s Church, Enfield. Interment and reception to follow. Family flowers only. Because of Mary’s love of nature that she instilled in her children, in lieu of flowers, donations may be made to the Nova Scotia Nature Trust, 81Prince Albert Road, Dartmouth B2Y1M1, or the charity of your choice. The family would like to thank the staff of the QEII 8.2 for all the care they showed Mary in her final days. And to Debbie, Denise, and Cathy, her caregivers for the past year, a sincere thank you. Condolences, words of comfort and memories of Mary may be shared with the family at: www.ettingerfuneralhome.com “There are some who bring a light so great to the world, that even after they have gone, the light remains.” -Unknown