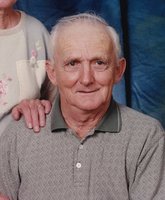 GRANT, Laurence “Laurie” Ralph -  passed away peacefully at home on July 19, 2019 in East Gore after a hard-fought battle with Cancer.

Born in a farmhouse in East Gore on April 20, 1937; Laurie was the 2nd oldest of 10 children and the oldest of 5 boys of Ralph and Jessie (Weir) Grant. Laurie grew up and worked his early years on his parents farm until he went to work in Halifax to learn the trade of carpentry which he worked at until he felt he could no longer maintain the high standard he set for himself and his work. He was a member of the Local 83 Carpenters Union until he retired from the union and worked at what would be his favorite job with Campbell Carpentry.

He was predeceased by his parents, Ralph and Jessie; and brothers, George, Earle, Philip, and Clifford.

Laurie was a friend to all he met, and his dry sarcastic sense of humor will be missed by his family and friends.

Thanks to the staff of Colchester East Hants Palliative Care and The VON for all their compassionate care leading up to his passing.

Visitation will be held 6-8 pm Tuesday, July 23rd with a funeral service at 2pm Wednesday, July 24th, all in Ettinger Funeral Home, 2812 Highway 2, Shubenacadie; Rev. Angus R. MacDonald officiating. A private family burial will be held in East Gore Cemetery. A reception will follow in the East Gore Community Hall.

In lieu of flowers donations can be made to the East Gore Cemetery, or a charity of your choice.

Condolences, words of comfort and memories of Laurie may be shared with the family at www.ettingerfuneralhome.com