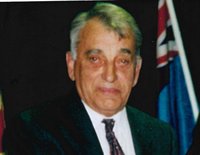 Isenor, Garfield Grant – 94, of Dutch Settlement passed away peacefully surrounded by family on January 10, 2020 in Camp Hill Veterans Memorial Building, Halifax. Born in Dutch Settlement, he was a son of the late Sandy and Eva (Hines) Isenor. Garfield was a loving husband, father, grandfather and great grandfather. His grandchildren and great grandchildren were his pride and joy. He loved life and the many people he encountered along the way. Garfield could strike up a conversation with everyone he met and quickly made friends. At the time of his passing, Garfield was the oldest surviving original resident of Dutch Settlement. He was a very hard worker all his life and spent 37 years working at National Gypsum. Previous to this he had been a member of the Military Reserves. He was a long-time member of the Elmsdale Legion. Garfield is survived by his wife of 65 years, Earlene (Ashley); his children, Jane, Peter (Donna); grandchildren, Mandi (Dustin) Jodrey and Erika (Adam); great grandchildren, Theodore and Russell; brother, David (Sheila); many nieces and nephews. He was predeceased by siblings, Harry, Hal, Clyde, Art, Louise, and Margaret. Cremation has taken place under the care and direction of Ettinger Funeral Home, Shubenacadie. There will be no visitation by request. A funeral and Legion service will be held 2pm Tuesday, January 14 in Saint George’s Anglican Church, Dutch Settlement, Rev. Canon David Fletcher officiating. Reception to follow at Riverline Community Centre. The family wishes to thank the staff at V3 Cedar West at Camp Hill for their kind and compassionate care of Garfield and his family. Also, a very special thank you to Marion Manning for all her help and guidance. Donations in Garfield’s memory may be made to Saint George’s Anglican Church, Dutch Settlement. Condolences, words of comfort and memories of Garfield may be shared with the family at: www.ettingerfuneralhome.com