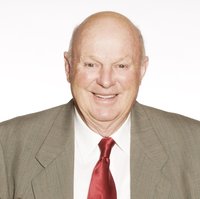 COUPAR Dennis George - 92, Elmsdale, Nova Scotia, passed away peacefully in the home he loved January 3, 2020. Denny will be missed by his 4 children, George (Carol MacCulloch), Margo Benere (Raymond), Marlene Forbes (David) and Murray (Kate Russell); grandchildren, Kelly-Anne, Crystal, Brian, Laura, Jenna, John, Keltie and Hana; sister-in-laws Betty Coupar and Isabelle Levesque (Ontario), many nieces and nephews; great grandchildren, Alick, Tavish, Lachlan, Madelyn, Hunter, Nathan, Miles, Lila and Erik; June Toole, whom he shared a lot of laughs, dances, adventures and much love with over the past 2 decades. Denny was predeceased by his wife of 47 years, Lila (Munro), sister Elenor, brothers John and Alan, and granddaughter, Sarah. Born in 1927 to George and Ruby (Porter) Coupar, Denny was born in Camden, NS and later moved to Bible Hill and lived on site at the College of Agriculture (currently the Dalhousie Agricultural Campus) where his father was a Provincial Landscape Advisor, teacher, and the head gardener. Prior to perfecting his own green thumb, he helped his father build and maintain his older brother’s greenhouse business for 5 years while he was away serving in WWII. He traveled to western Canada to work in the forestry industry but quickly returned and worked on the Halifax Dockyards, and later the MacDonald Bridge construction. Denny and Lila met and later married in 1952. They moved from Halifax to Elmsdale in 1957 to build a home and raise their family in the country. He spent many hours quietly volunteering in his much-loved community and he couldn't figure out why everyone didn't want to live here. With Lila’s support at home, Dennis had the grit, determination, smarts, work ethic and stubbornness to grow Dennis Coupar Landscaping from a one man company with a shovel, wheel barrel and a 1/2 ton truck into Elmsdale Landscaping. He led by example and would never ask anyone to do something he was not willing to do himself. It is tough to slow down when Dennis was setting the pace picking rock in the sod field beside you, well into his 80’s. An animal lover, his children grew up with horses that came to the kitchen door for bread and molasses, yard dogs that slept in the living room, cats that were sometimes fed from his side of the table and cows that became pets. If it was light out, Denny was on the move. Endless hours were spent at the office, checking on sod fields, jumping in his truck or a tractor to go plow snow, tending to flower gardens, days spent at the shore in Brule, swimming and watching over the bank with a big smile, as his kids, grandkids and great grandkids grew up playing on the sandbar and endlessly trying to stop the tide from taking it away, driving back roads to see where they went, travelling near and far. If it was dark out, Denny was on the move. Visiting dancehalls on Saturday nights, he loved country music and tapping his foot to the fiddle, visiting a friend, telling stories, sharing a scotch, spending weekends by the shore in Brule playing Brule bridge or sitting around a fire. There was one time of the day you could be sure to catch Denny sitting down, in his recliner, all ready, for “the show”. Victor and the cast of The Young and the Useless caught his imagination decades ago and he watched faithfully every weeknight. Above all else, he loved laughing and spending time with his family and friends. How do you define a man who lived his life so well? A son, brother, husband, father, grandfather, great grandfather, boss, businessman, cancer survivor - friend. Denny was a true friend. You could count on Denny, he was dependable, kind, honest, and genuine. Combined with his dry sense of humour and easy laugh, people loved spending time with him. Cremation has taken place under the care and direction of Ettinger Funeral Home, Shubenacadie. Visitation will be held 6-8pm Friday, January 10th at Riverview United Church, 760 Highway 2, Elmsdale. A service to celebrate Denny’s life will be held at Riverview United Church 10am Saturday, January 11th. If the church reaches capacity live stream of the service has been arranged at Maple Ridge Elementary School, 1066 Highway 2, Lantz. In lieu of making a memorial donation we are sure that Denny would prefer that you make an additional effort to spend time with those that you love and laugh a little more. Condolences, words of comfort and memories of Dennis may be shared with the family at: www.ettingerfuneralhome.com